Several days have passed since the first salt/vinegar test patch was made. I wasn't too excited about it at first, but as it has developed, I'm liking it more and more. The undissolved grains of salt have formed some nice bits of verdigris, and the background, which I first judged as being too pinkish, has deepened in color.

The bit on the left is the salt/vinegar test. The darker sample on the right is the result of a test with bleach. The bleach aged the copper to the dullish brown found on naturally aged copper but did not produce any verdigris. I'm sharing it here in the spirit of science. 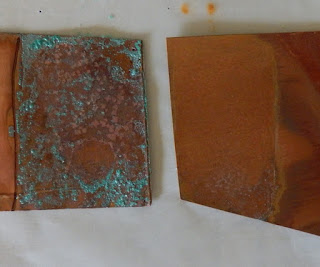 For comparison, here is a photo of the salt/vinegar mix after about one day. Notice how the background has darkened and the patches of verdigris have developed. 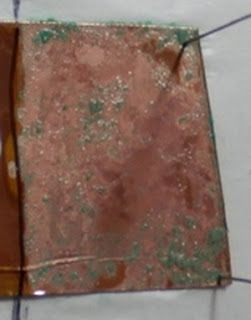 I am leaning toward the salt/vinegar mix. I'm going to glue the panels in place on the tower roof while I think about it.