Beacon Hill - First Lights & a Challenge in the Parlor

Th past few days have seen  progress in the dining room and front hall. Wallpaper, trim, and lights!

The dining room sconce was first. The tape wire that serves it is on the hall side of the wall, so it had to be installed before the hall could be papered. The chandelier will be wired to a bit of tape on the floor of the room above. It will be added when that flooring goes in, to protect the joint. 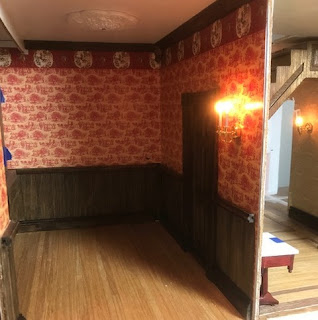 The front hall was a bit tedious, as the stairs had to be moved in and out sevrl times to adjust tolerances. the near door in the parlor wall had to be blocked and the far door had to be enlarged to accommodate the Houseworks door. I was able to do the enlargement fairly easily using my pistol-grip Dremel. I drilled a series of holes along the new profile and used pliers to snap off most of excess wood. The Dremel's drum sander, with a bit of corner clean-up from a utility knife, finished the job. The door fits but cannot be installed until the parlor wall is papered.
There are three lights here -- a ceiling light in the foyer, a sconce under the stairs, and a chandelier above the front door. Unfortunately, the chandelier is blocked from view by the stairway. There will be a mirror on either the back or side wall, above the landing, which I hope will reflect light from the chandelier. When it was staged with a few piece of furniture, it became obvious that  had this room also received wainscoting, it would have been way too dark. 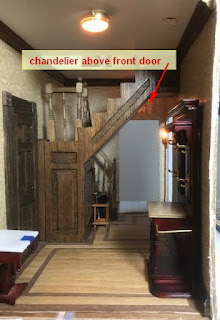 Next comes the parlor/music room. There are to be two sconces on the back wall. The challenge is that the tape wire is on the same side of the wall. I have thought about this for days and have a plan. 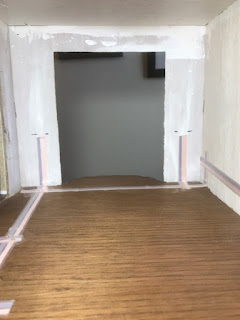 This is a template for the wallpaper. My thought is to paste the upper portion, make a horizontal cut just below the sconce and fold the paper back to expose the tape wire. Then the wires can be soldered and the paper pasted over.  The wallpaper has a busy pattern that I believe will easily hide the surgery. If anyone has a better (read easier) idea, please let me know! 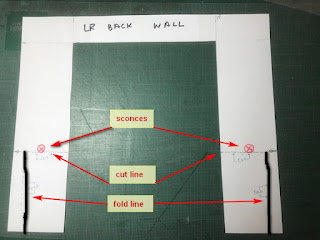 The parlor has another challenge -- a table lamp that will sit on a table in a bay near the front of the room, away from the wall.  How to hide the wires without drilling through the table and floor and coming up from under the house?